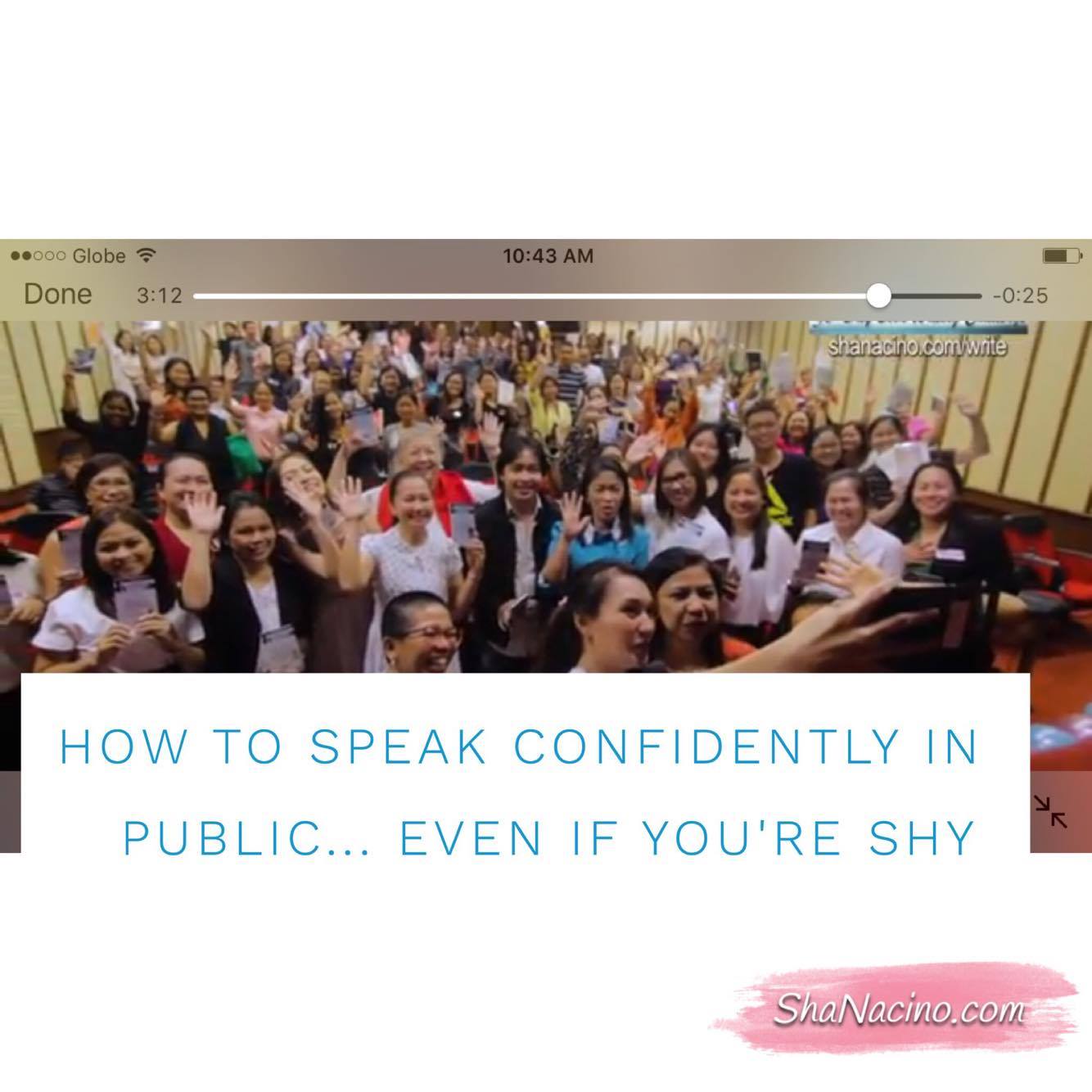 Are you afraid to speak in front of a group of people?

Do you want to gain more confidence the next time you are asked to speak before an audience?

Do you want to learn public speaking strategies that will allow you to captivate the attention of your audience and keep them engaged all throughout your talk?

Do you want to become an engaging speaker and inspire your audience even if you are shy?

You’ve come to the right place.

Hi, my name is Sha Nacino. I’m an author, a book writing coach, a motivational speaker, and a radio show host.

Since 2011, I’ve spoken to thousands of people all over the Philippines and some parts of Hongkong, Malaysia, and Madrid, Spain.

I was Shy and Introvert

I wasn’t always good in public speaking. Prior to becoming a professional speaker, I was painfully shy. Plus, I’m an introvert.

I cried in my first speech!

I could still remember my first speech in a Toastmasters group. There were about 20 people. I stood in front of them and I was so nervous, my knees were literally shaking.

My mind went blank and I couldn’t think of anything to say. Out of nervousness, I cried. And that was my first ever speech in that community.

I persevered. I kept studying how great speeches and talks were delivered. I attended seminars.

Years later, I wrote my first book and I got invited to speak in Learning Curve’s Money Summit 2011.

From a paying attendee, I became a resource speaker. I shared the stage with the CEOs and VPs of big companies in the Philippines. The organisers asked me to speak just because I wrote a book related to the theme of their event.

I even got invited to speak at the Office of the President of the Philippies in Malacanan.

There are Strategies to Engage the Audience and Inspire them

Through the years, I’ve learned and continually improved my craft as a speaker. In fact, one of our practices in Toastmasters is to evaluate speakers.

As an Evaluator, your task is to evaluate what’s good about the speech and suggest what can be improved.

I joined the Speech to Evaluate Contest and I was the champion in the club level, area level, and division level. I competed in the National Level held in Dumaguete in 2005 and I won 1st runner up.

I can teach you how to speak to inspire and how to engage your audience.

But before that, let me share with you a brief story.

A few years ago, I was in a university outside Manila. I just gave a talk and I was now seated with the audience.

The next speaker was on stage. At first, the students were engaged, maybe for about 2 minutes. After which, I heard the chatters and the speaker continued to speak.

Later on, the speaker faced the screen where his powerpoint was projected and he was so engaged in discussing his topic…but the audience was disengaged.

That’s when I realised how challenging it is to sit in a talk and listen to someone who is… uhmmm….boring.

On another occasion, I attended a 3-day conference. On Day 3, a speaker was speaking in front and I tried so hard to concentrate and listen to her but I just couldn’t. Why? Because her ideas were not organised.

To make matters worse, she didn’t show any enthusiasm. There was no passion at all. It’s almost as if she was just forced to speak.

Too bad, because the attendees paid for the summit. And the speaker had all the chance to inspire, instruct, and influence. She had the air time. She had our attention, at least in the beginning.

I have so much respect for the two speakers.

I knew they did their best. They mustered enough courage to speak in front. They must have spent so much time preparing for their respective talks. They didn’t mean to bore the audience.

But perhaps because of lack of training in public speaking, and lack of honest and constructive evaluation for her speeches,

I Want to Help You Gain Confidence and Competence in Public Speaking!

This is the reason why, for the very first time, I am doing a PUBLIC SPEAKING WORKSHOP called Speak to Inspire.

I am not perfect. I still have a long way to go as regards my journey as a speaker. But in my 6 years of speaking and learning, I realised that there is a FORMULA to becoming an effective, engaging, and inspiring speaker.

I remember when I gave talk at Batangas State University. 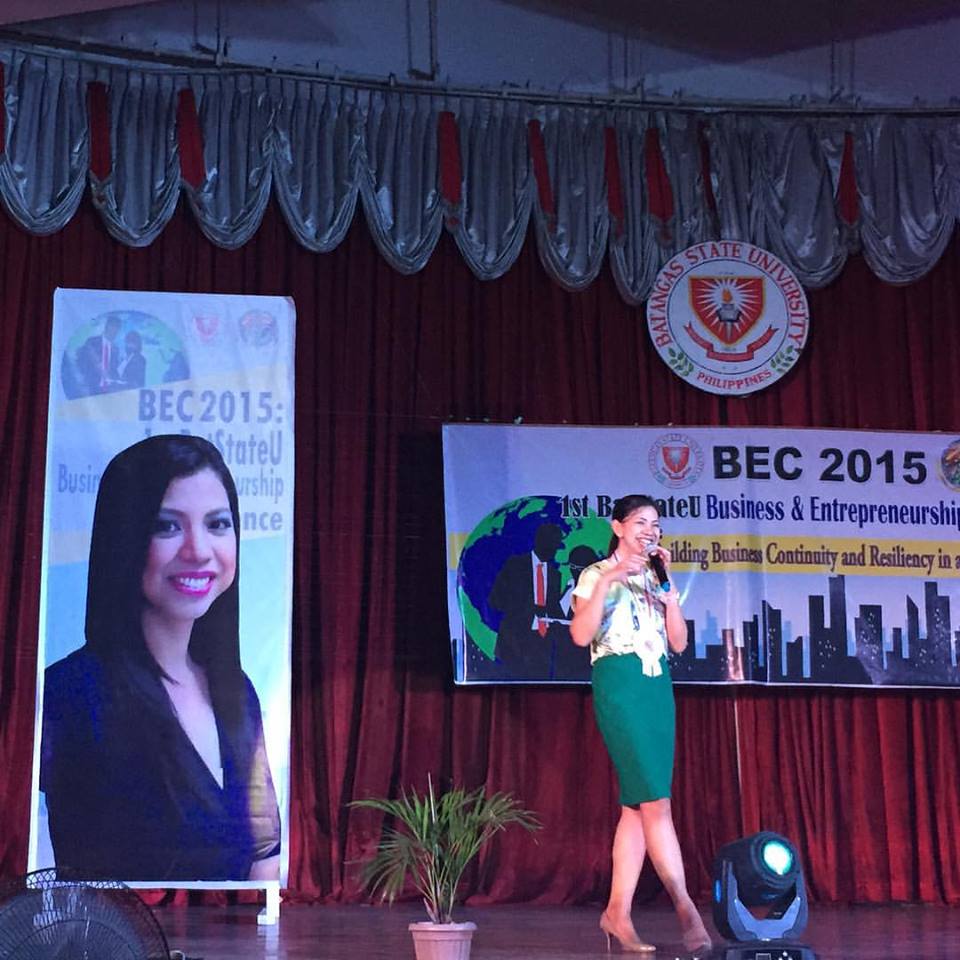 There were 1800 students. Temperature was a bit hot, students were fanning themselves. Plus, the lights were switched off except for the spotlight that was directed to the stage. Perfect scenario to sleep or talk with your seatmates.

My prayer was, “Lord, I want to reach out to each and every student — including the students seated at the farthest part of the gym. I don’t want anyone to be left out, not even one.”  When my name was called, I scanned the audience and I started speaking.

During my one-hour talk, I felt the audience and I felt they were so engaged and enthusiastic. They laughed. They took down notes. They listened. They asked questions during the Open Forum.

A week later, I received this email from one of the students. It was a confirmation that the talk went really well.

Public Speaking is scary. That is how it is perceived and that’s how many people feel about public speaking.

I can teach you how you can effectively engage and inspire your audience — whether you are speaking to a group of 20 or 200 or 2,000.

In this workshop, you will learn:

After this workshop on public speaking, you will come out more confident and more equipped to speak in front of an audience.

Most of my public events have around 100-150 attendees.

But for this workshop, I want to limit the attendees to 30 people only so I can work closely with you.

How Much is Your Investment?

Registration is only P1,997. This includes your workshop materials, certificates, drinks, and snacks.

P.S. For your learning needs and for the complete schedule of our seminars and workshops, visit http://seminarphilippines.com/events 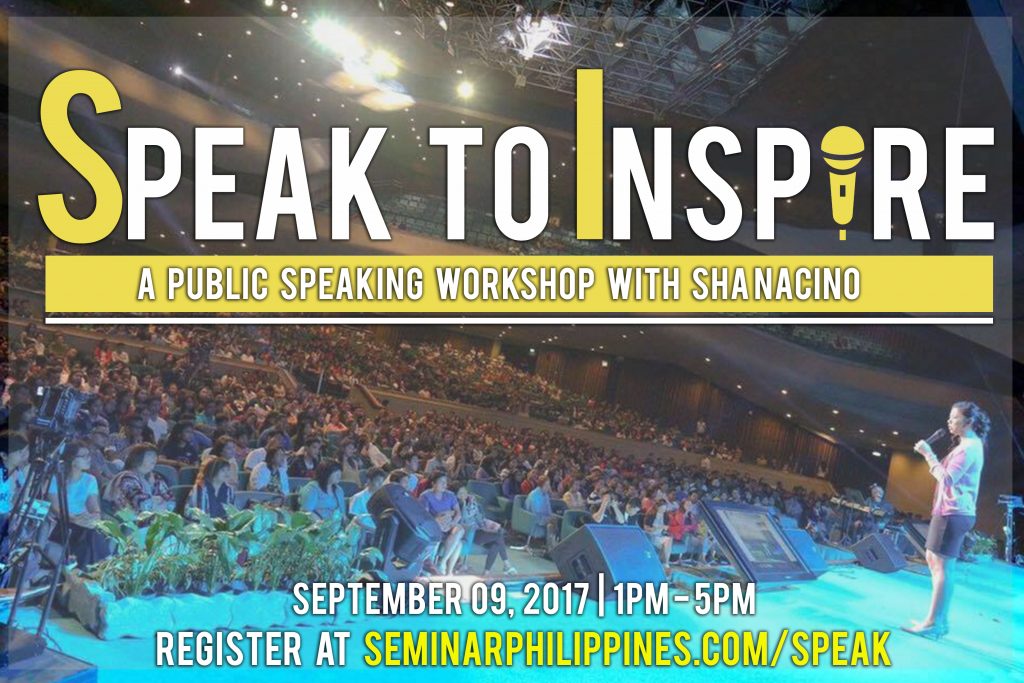 Get this FREE eBook! 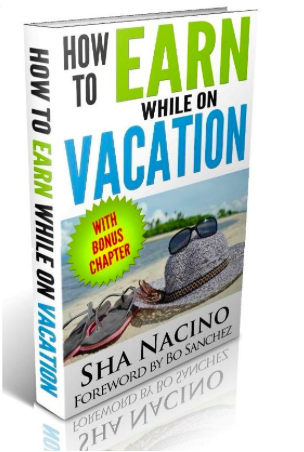 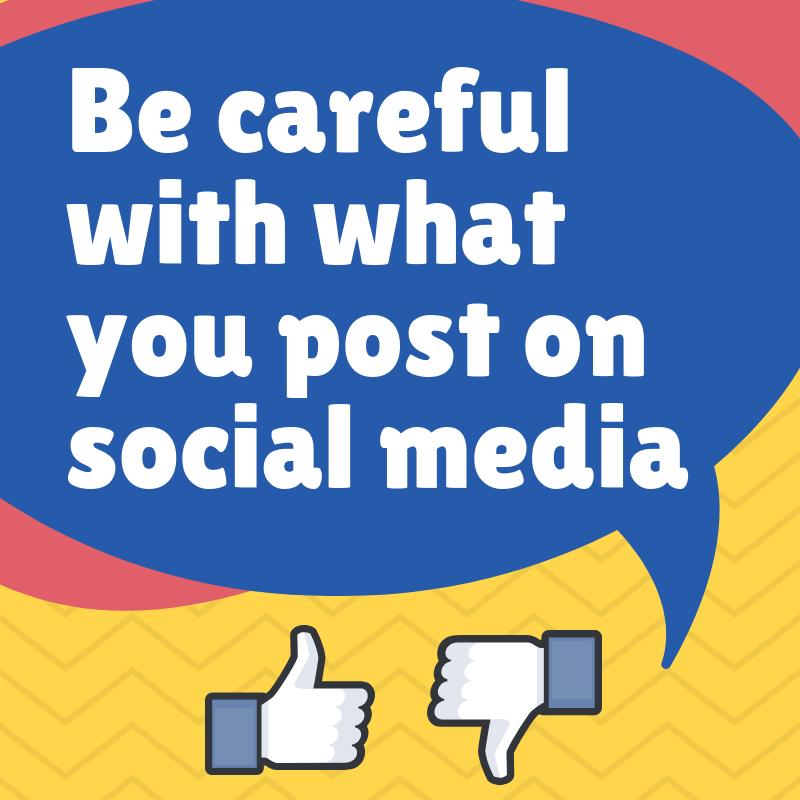 Be careful with what you post on social media 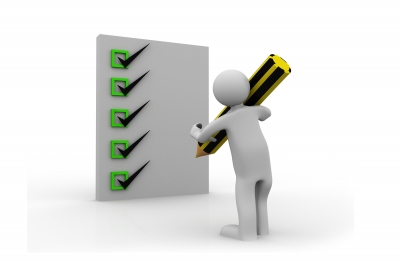 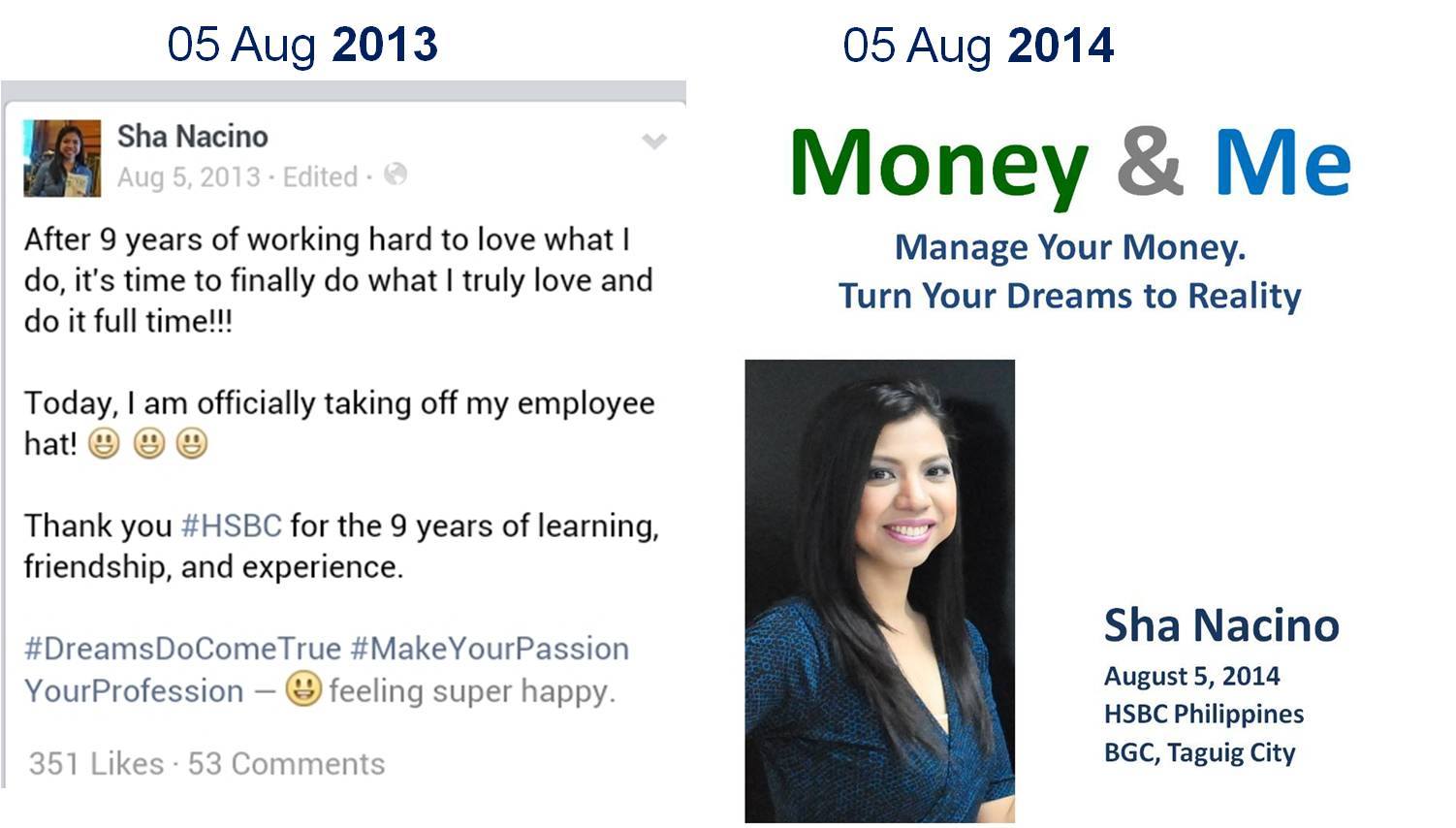 Did I Make the Right Decision When I Quit My Job 4 Years Ago?